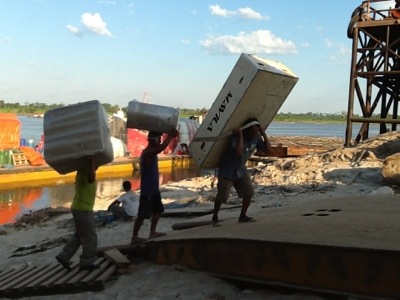 Very few people in the United States carry heavy things on a regular basis. Sure some of us may go to the gym and lift heavy things a few times but we are not carrying 220lb around all day as part of our job. Industry in the US is highly concerned with safety. Lifting a 50lb box is often the upper limit allowed in US industry (I would be curious to know of the exceptions), boxes often contain warnings advising a two person lift or the use of a forklift, etc. This has not been in vain as US factories have gone from being death traps to workable places in the last century. I do not know how many of these injuries currently or formerly resulted directly from heavy lifting. That it something I need to look up.

With smooth, flat surfaces and various motorized tools at our disposal, heavy lifting is no longer necessary in the US. But here in Peru heavy lifting by humans is still quite common. It shows up most in places where the surfaces are very uneven and motorcycles and bicycles cannot go. The best example of this are the ports.

The ports of Iquitos in the Amazon of Peru are large and hundreds of boats dock there every day. Iquitos is the largest “river locked” city with no connecting roads to any other cities. All commerce flows by river, and this is no small amount of commerce as Iquitos is also the last major city in the Peruvian Amazon before one reaches Manaus in Brazil.

Despite the high volume of traffic, the docks are nearly completely unorganized. They consist of a tangle of floating rafts, barges and other boats all connected by unfastened planks. Larger river boats have their own docking place which consists of nothing more than a large plank against a steep and rocky river bank.

So what are the postures and movement patterns people in Peru use to carry as much as 220 pounds of potatoes, onions, bananas, electronics and everything else that is bought or sold? 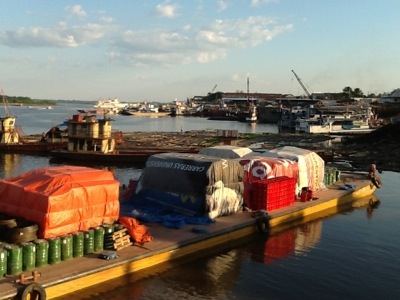 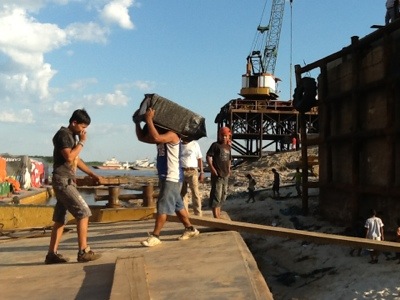 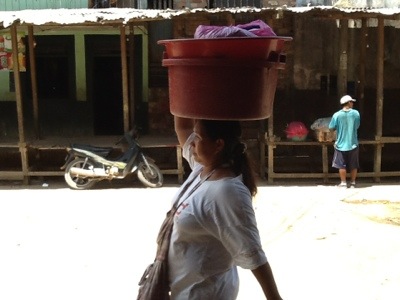 I only observed two techniques for carrying the really heavy loads (100kg or 220lbs seemed to be the upper limit): the tump line and the other approach which I will call the “headless monster.” The tump line is a strap across the forehead then slung underneath the load. The weight is distributed more of less vertically down a straight spine and the hips are bent to create a forward lean. You can see this technique being used above to carry a large awkward box of electronics, a sack of potatoes as well as a smaller box. The tump line has a long history of use in the Andes going back to the Inca. It has also shown up in other mountain regions such as the Himalayas. I think it shows up in the mountains because when you are walking uphill you automatically adopt the forward lean posture. Adding a tump line takes this posture and loads it vertically. The more vertical the load, the easier it is to carry because the moment arm is shortest.

The “headless monster” approach does not have any such unique history that I am aware of. It is basically how you would carry something n your shoulders if your head did not exist. Again we are going for vertical loading but ignoring the problem of the head by pushing it out of the way.

So does all this carrying of heavy stuff hurt? I tried to answer this question in two ways: I asked people and then I tried it myself. I got mixed responses to questions about pain from the workers. I asked about necks, backs and knees because these looked like the most likely places for pain. In a group setting people almost always said,”no it does’t hurt at all, I am accustomed to it” (i.e., i almost always got bravado). However, when I spoke to people one on one some said it hurt their backs while others maintained that nothing hurt. Most of the workers were in the or twenties or thirties but a few were in their forties, so I asked what happens when they get old. The response was a few jokes about the knees of one of the older men present. Beyond this they just said “they find other jobs.”

I ran across the wobbly plank into the hold of the ship. I watched as a man did a full deep squat while two others loaded him with 220 pounds of potatoes. I said “I’m next.” They managed to get he potatoes on my back with difficulty because of my height, then I had to do a squatting run for 100 feet because I was too tall to stand up in the hold. Once outside I readjusted then picked my way over the cargo on the deck, down across the precarious planks partially submerged n the water and up a steep hill of gravel to the waiting truck. The load was sliding off my back as I ascended so I doubled over more and grabbed it from overhead before pitching it backwards onto the truck. You can see a picture of the arrangement above.

They paid me 60cents for my efforts and I walked away breathless with a muscle spasm in my lower back. (not painful just understandably tight). It was a sloppy job, and next time I will use a tumpline. Or maybe learn how to build a conveyor belt.

One thought on “Carrying heavy things”