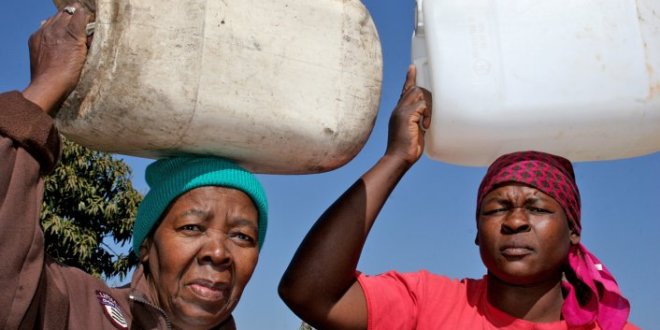 I have been fascinated with the topic of carrying things on one’s head for the last several years. I took a class in 2010 by Esther Gokhale who recommends adopting the neck posture she observed in women carrying pots on their heads in India and Africa. This is a posture in which the head is aligned more directly above the torso than most people in America are accustomed to. This retracted neck posture seems like a good antipode to the vulture neck most people with desk jobs tend to sink into over time
But what about loading? The retracted neck posture shows up everywhere in the world that people carry things on their head, but does it allow them to carry things pain free?
From Jager et al. 1997 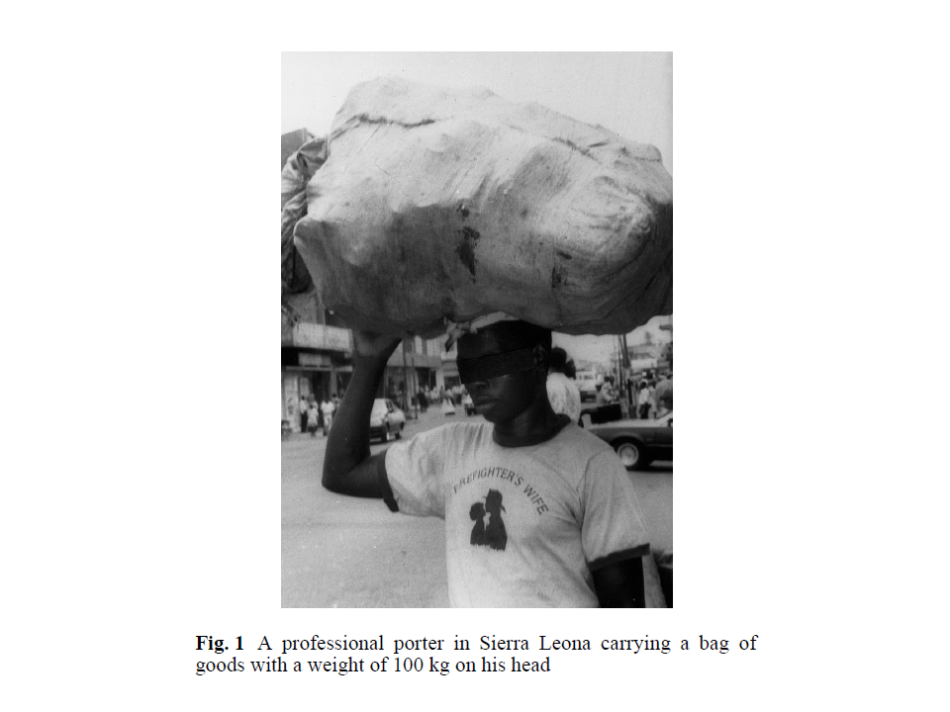 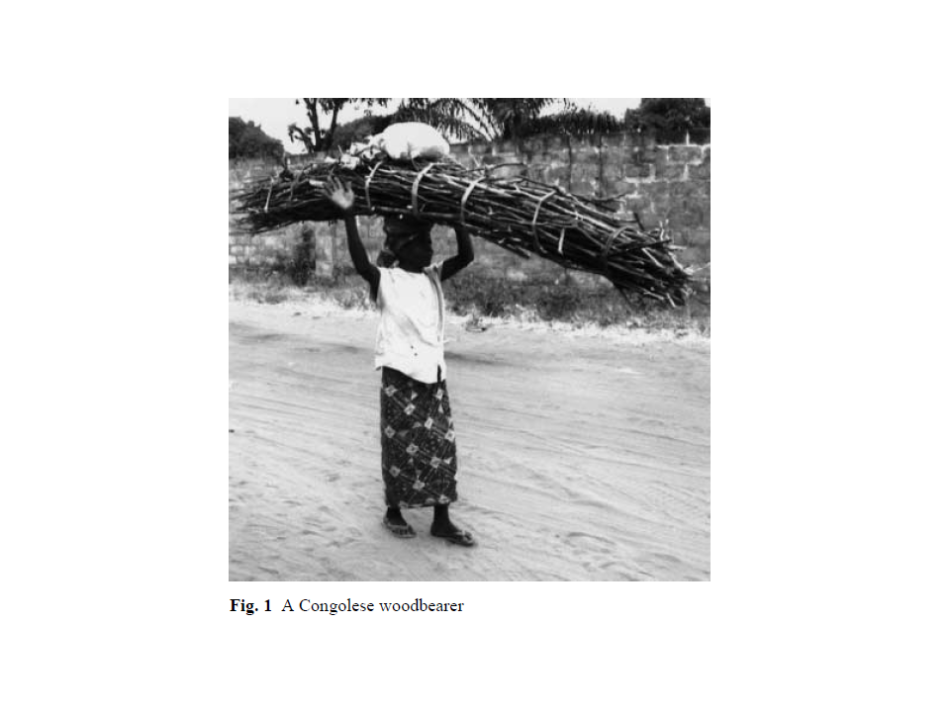 DATA
In 2010 a review investigating the implications of water carrying for health was written by Jo-Anne Geere (a PT), Paul Hunter and Paul Jagals from the UK and published in the Journal of Environmental Health. They summarized the sparse literature on water carrying in a page and a half.
Here are some of the results of their literature review:

-81.3% of the 107 Indian porters complained of some pain related to their job. The most common complaints were neck pain at the base of the skull (69.7%), a loss of neck range of motion (49.5%), and neck crepitus, ie cracking or popping with movement (48.6%). There was no correlation between severity of degeneration and complaint of symptoms. 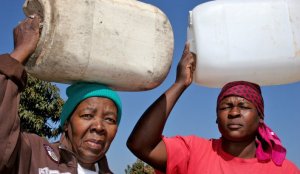 The research team also conducted a pilot study in which they interviewed 29 people that they observed carrying water in six rural villages in the Limpopo Province of South Africa. Here are some of their pilot-study findings reported as averages as well as how widely the data varied from that average (ie standard deviations: SD)

In the interviewa they asked open-ended questions such as “Can you tell me about your experiences carrying water?” and “How do you think carrying water affects you?” So what do you think, was carrying water painful? Or did they respond as most (but not ll) Peruvians did when I asked them about pain with lifting “estoy acostumbrado.” (I’m used to it)
The answer:
APPLICATION
What This Study Proves
What does this prove? The only thing we can know for sure is that most of the people who have been interviewed in various parts of South Africa (Lloyd 2010 and Geere 2010) and the group in India (Siddarth 2010) said carrying water hurts. Nothing more. I find it interesting that none of the 35 porters included in the Sierra Leone porters reported any neck pain or discomfort despite significant joint degeneration at a young age. For me it is a reminder not to assume that a task is either painful or pain-free simply based on the mechanics.
This x-ray is from a study on coolies who carry enormous weights on their heads (like 100 pounds) in west Africa (Jager 1997). This subject on the right happened to have a straight spine. The subject on the left did not. Both had degenerative changes. The authors unfortunately did not measure the curve in the neck so we don’t know if it had and relationship to degeneration. 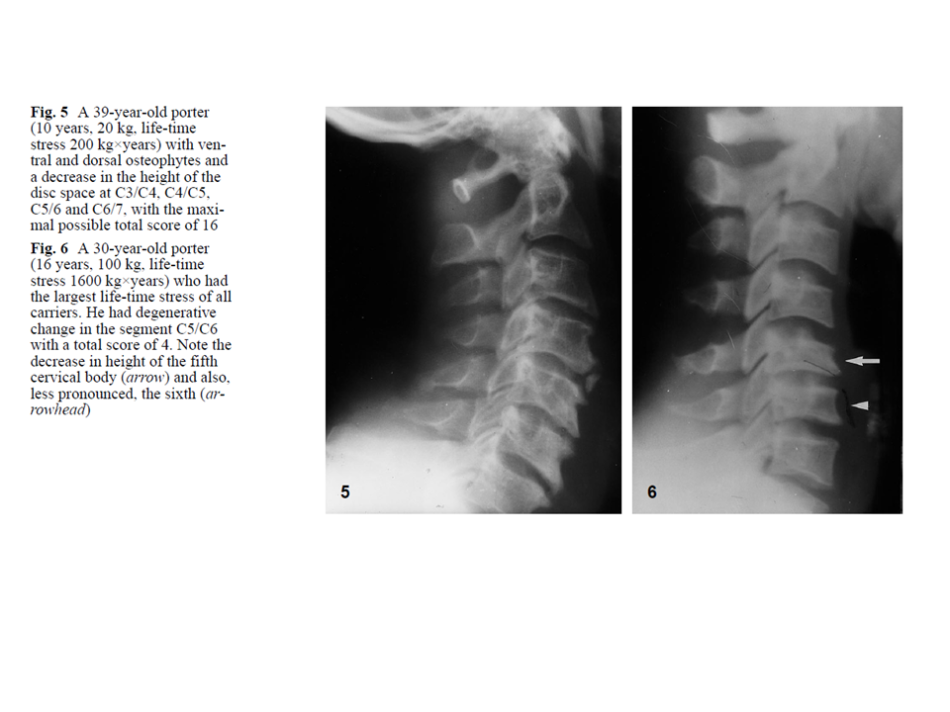 Here is an MRI of my cervical spine from 2010. I am lying down on my back and doing a chin tuck. I was surprised to find that my spine was actually straight. I can’t say that a straight spine is better than one with a smooth curve but it does show that I am not stuck in a curved position. 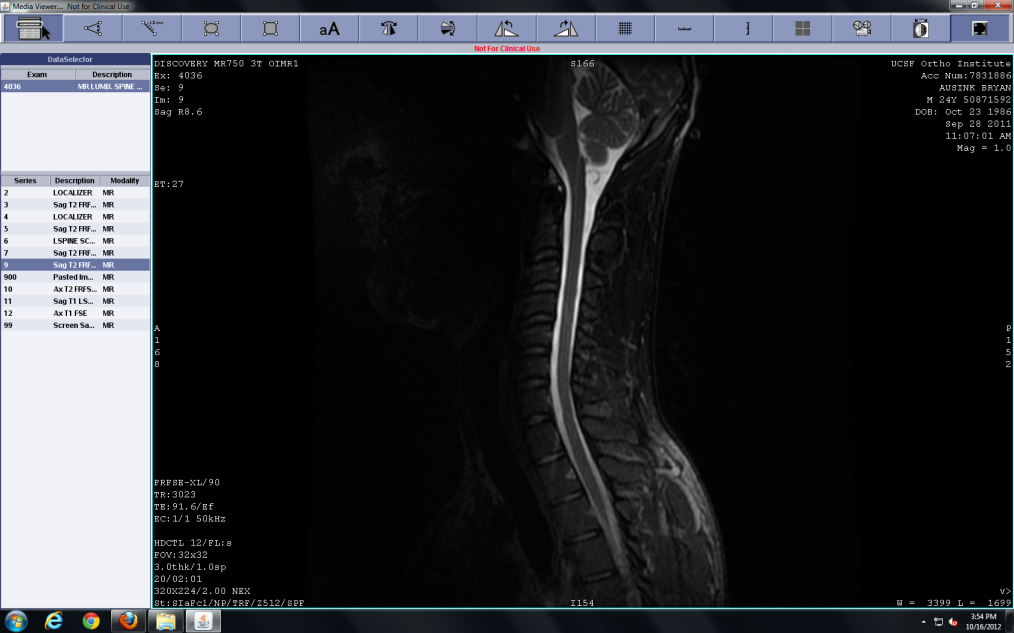 The current evidence is insufficient to answer my question because the authors were not recording neck posture and the methods were not rigorous enough to make any firm conclusions about the relationship between carrying things on the head and pain.
We also don’t know how important the weight of the load and the frequency of loading matters here. I suspect it is the critical variable.
So it seems that carrying heavy loads on your head for years will result in more rapid cervical degeneration. Although this degeneration does not correlate with symptoms, the current state of evidence indicates that many people who carry heavy loads on their heads do find it painful.
At this point I would like to mention the perceptual nature of pain. Whether one finds a particular movement or behavior painful is closely related to how one view that behavior. If a child views carrying water as a lowly chore, or an adult views it as a symbol of their poverty they may he more likely to find it uncomfortable or even painful.
How This Data Affects My Life
I use head loading to carry awkwardly shaped (and often heavy) objects short distances, such as a 50lb, 62″ box through a crowded airport or dock. I’m not worried about this activity causing pain or damage because 1) I do it infrequently, 2) I use what I believe to be the optimal posture for carrying loads on the head, and 3) I have a lot of fun doing it.
Me at with box-full-o-tandem-bicycle on my head. I suppose I could hire people to carry it around for me but taking more of the burden on myself makes me feel more abled. See my post on the human-environment interaction and disability for more on this. 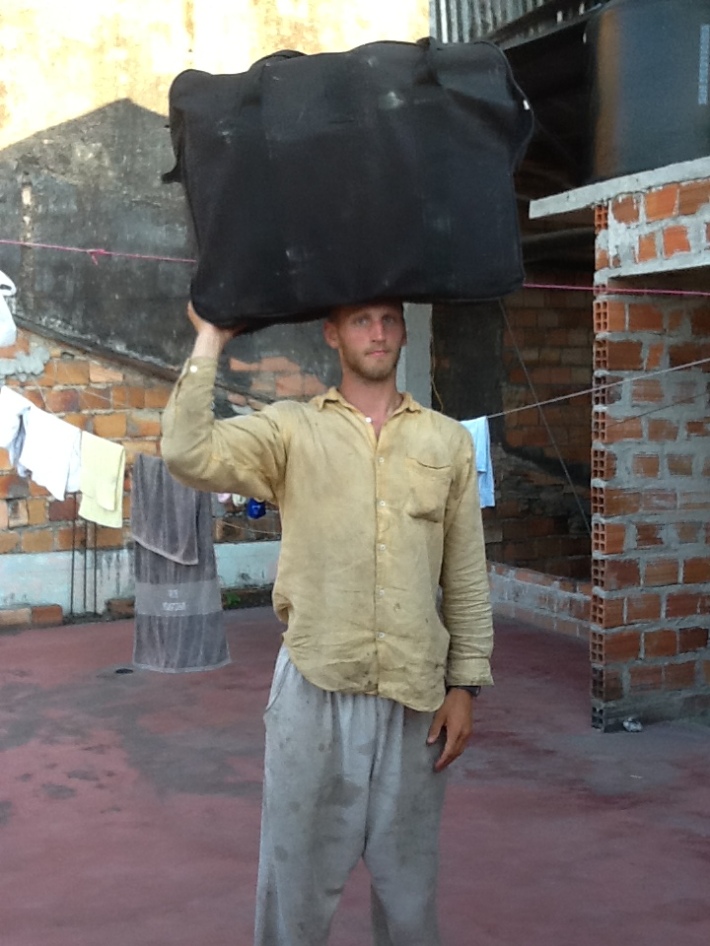 The hippo water roller looks like a great solution to reduce the amount of cervical degeneration caused by carrying heavy loads of water on one’s head everyday from a young age. 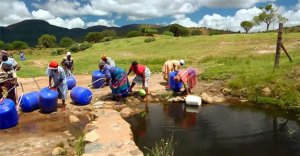 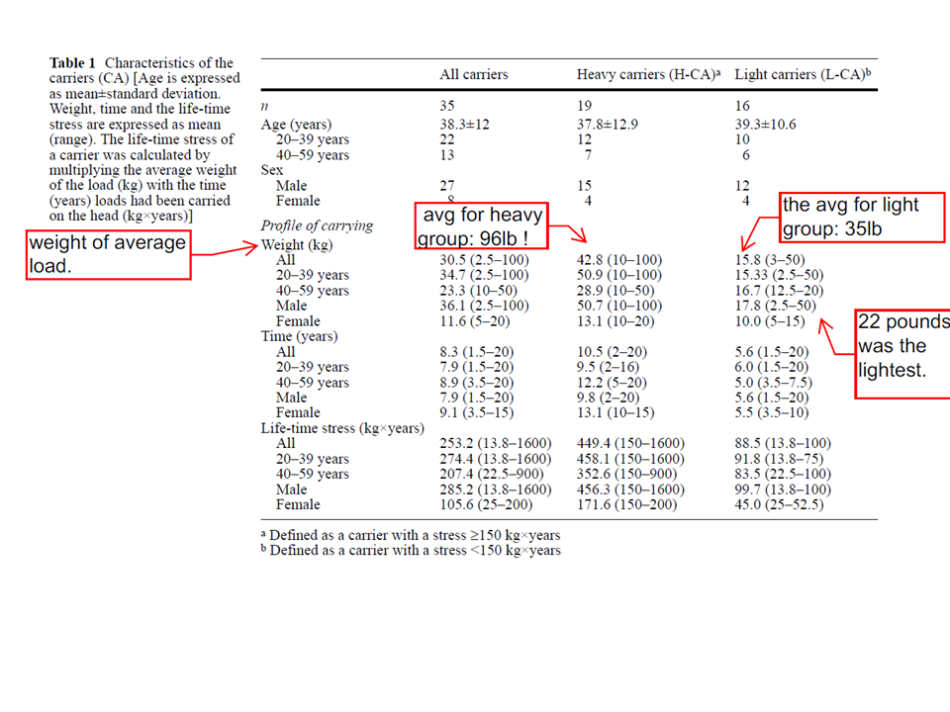 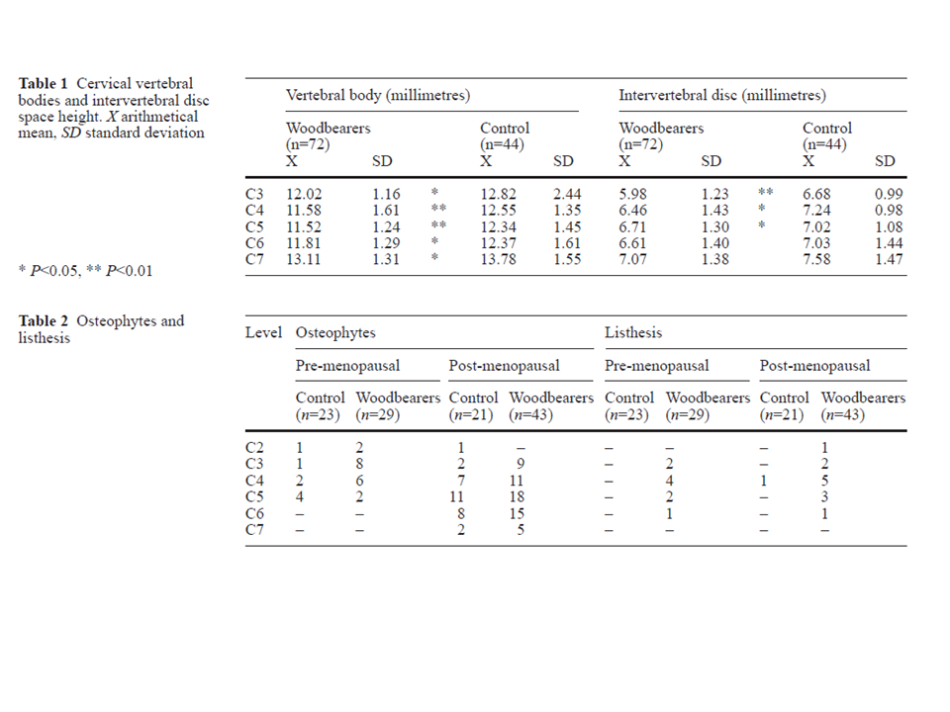 5 thoughts on “Can One Carry Heavy Things on Their Head Pain-Free? A Review of Geere 2010”