The western world is full of chairs. We have chairs in our kitchens, offices, cafes, living rooms and our bathrooms.

Traveling in Ecuador and Peru, I encountered considerably fewer chairs than I was accustomed to in the US. One conspicuous place that the chair was often absent was the bathroom. In its place was the squat toilet. The squat toilet varies in sophistication but is essentially a hole in the ground over which you squat to make your deposit. In Peru (but not Ecuador) we often encountered specially built squatting toilets which had raised foot platforms to keep your feet dry. Flushing with a bucket of water was the standard. Unfortunately for the environment, many of these toilets drained directly into a stream or river.

I read about the squat toilet while in PT school and heard it was quite common in Asia. I did not expect to see it so often in South America but it showed up again and again. In the Amazon there were often no toilets whatsoever, I suppose you could say that no-toilet is in reality a squat toilet. The Andes was where we often saw some version of a concrete molded squat toilet. 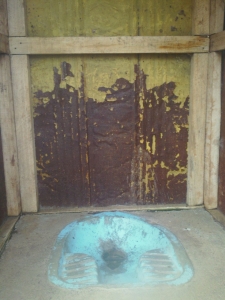 Closeup of squat toilet outhouse above.

Claim that the squatting posture is better for defecating. Notice this picture shows the subject fully clothed. Indeed “pants around the knees” is the optimal arrangement for the squat toilet as opposed to the “pants around the ankles” style of the throne.

Squat vs Throne, Which is better?

Sanitation
The squat toilet appears to be more sanitary than the throne because there is no seat to serve as a vector for disease. Disposable toilet seat covers are often available to address this issue in the US, and one can always line the seat with toilet paper, but the squat toilet needs no such embellishment

GI Health
I had heard that the deep squatting position helped full evacuation, so I looked to see if there is any evidence backng up this claim. I found several studies related to the topic, and the results were not as enthusiastic about squat toilets as some of the editorials have been. In healthy adults without urinary or bowel problems who have full relaxation of the pelvic floor muscles during voiding, pelvic position had no effect on urine flow. Studies investigating the amount of descent of the pelvic floor muscles found no difference. My recommendation is to test it out for yourself. This wikipedia article on “human defecation postures” has links to some research published on the topic.

Joint Health
Hip osteoarthritis is very rare in India and Asia. On the other hand, these regions have similiar rates of knee arthritis as Europe and the Americas. Genetic differences likely contribute to this discrepancy but the differences in daily postures and movements between these regions is also a potential factor. I haven’t seen any direct evidence that squat toilets will prevent hip osteoarthritis but deep squatting on a daily basis will help maintain full hip range of motion which is good in thing in any case.

In my opinion the squat toilet beats the throne by a slight margin but it is mostly a matter of preference. Going back to the human-environment interaction model of disability however, replacing all the sitting toilets in the US with squatting toilets would result in a lot more disabled Americans. People with hip replacements, ankle fractures and those who are just plain stiff would find themselves in a difficult position.

Stay tuned next week for an explanation of the #1 reason why people find the deep squatting position difficult.