But you might be asking “Why is my achilles sore when that other guy with terrible running form is doing twice the mileage as me?” or “why do I have posterior tibial tendon dysfunction when Haile Gebreselassie ran with a ridiculous amount of overpronation and and I’ve never heard of problems with his tibialis posterior or achilles tendons [2,3]?

As a doctor of physical therapy, I face these “why me” questions frequently and lucky for you, I have read the available research literature to bring you the best answer.

Tendons are the elongated connective tissue attachments between muscle and bone. Long tendons in particular have two important functions:

1) Allow muscles to be placed conveniently close to the center of the body. Because of its long tendon, the tibialis posterior in the calf can hold up the arch of the foot without  bulking up the foot.

2) Help store elastic energy to produce explosive movements. The Achilles tendon is the largest and strongest tendon in the body and is estimated to sustain loads up to 12.5x body weight when running at 13.4mph [4]. Together the tendons and ligaments of the foot return an estimated 93% of the energy they absorb to the ground for propulsion [5], while stretching less than 4% [6].

The tibialis posterior tendon is highlighted in blue. Notice how the thin tendon loops around the arch of the foot and holds it up. Screenshot from Visible Body Muscle Premium for ipad

Tendons are made up of 60% type 1 collagen and varying degrees of type III, V, XIV and XVI collagen and supporting cells according to tendon’s function. The composition of the tendon of the supraspinatus in the rotator cuff and the patellar tendon aren’t exactly the same [7].

Like all connective tissue in the body, tendons are constantly under renovation [8]. Enzymes such as matrix metalloproteinases break down collagen and tenocyctes make new collagen [8]. More loading stimulates the growth of more collagen, less loading and the tendon is broken down to the minimal level needed [8]. Tendon’s need this loading to be healthy, a week of bed rest and the tendon shrinks dramatically [4]. This process has helped us survive by 1) saving valuable protein and energy and 2) Removing an damaged tissue to keep the tendon functioning optimally. The take home messages are that 1) you don’t have the same tendon that you did, say 5 years ago, piece by piece the entire thing has been rebuild and 2) Your tendons need to be loaded to stay healthy.

At this point you are probably asking: If the tendon is constantly being renewed, how do we end up with tendon problems?

The Source of Tendon Problems

The formula is simple but the ways in which different factors in LOADING and REPAIR vary and interact with one another is complex. While most of the loading factors have the potential to be changed in some way, most of the repair factors don’t.

1) LOAD. They aren’t all easy to change but at least there is a chance.

2) REPAIR. This is the dark side of tendon problems and part of the answer to the most frustrating “why me” questions. 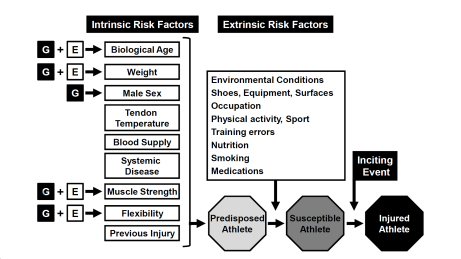 This model of the risk factors for achilles tendon injury highlights the complexity and includes several factors I didn’t mention. G stands for genetic and E for environments [15].

The chance of getting a tendon problem is a combination of things you do and the luck of the draw. Although the factors I have described increase the risk of getting the problem, it is not clear how they influence the effectiveness of treatment. Treatment of tendinosis is for the most part effective, but current treatments such as eccentric exercise are time consuming to perform and improvement occurs gradually over the course of months. While many people who have genetic risk factors for tendon problems never get them, and many people with tendon problems don’t have the genetic risk factors, it remains to be seen whether the development of genetic specific treatment programs will speed the recovery process in the future.